The people of Pleasant Hill United Methodist Church have been sharing God’s message and love in North Topeka for over 120 years.

By November of 1883, excitement had grown to such a level that the people began to construct a church building near 62nd Street and Rochester Road. In fact, one family was so enthusiastic about the building project that they donated the money they had been saving to build a new house for themselves.

Built by the people themselves and financed through sacrificial giving, the completed church building was dedicated on Jan. 4, 1885 as a Methodist Episcopal Church. The church building was a charming, classic, white, gothic style, country church with stained glass windows, a tower and steeple.

The people gathered to worship God, study the Bible, share in fellowship, and serve the community. The project was not without controversy – some members chose to leave the church and start a new church at Elmont.  In that same year, the church collected its first missionary offering.  From the beginning, the people of Pleasant Hill understood the importance of sharing of God’s message and love throughout the world.

Our church received its current name in 1968 when the Methodist Church and the Evangelical United Brethren Church merged to become the United Methodist Church. During the mid-1960s it became evident that the old church building was not meeting the ministry needs of the congregation. 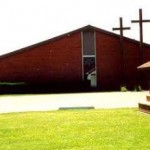 On Easter Sunday of 1972 construction began on a new building at a new 5-acre site – 5919 NW Glenwood Drive. Once again, the people rallied around the project volunteering labor and financial support. On May 20, 1973 the new building was dedicated. The new building provided more space for worship, fellowship, education, and service. The old church was sold to Topeka Southern Baptist.

While on Glenwood Drive, the congregation was very busy. To keep up with growth, projects were many including renovations of the entire church building, adding an elevator, paving the parking lot, installing a new sound system, and building a new garage – to name a few projects.

To keep up with growth, the congregation went from one part-time student pastor with no paid staff to a full-time pastor with several paid staff positions, including a church secretary, music director, custodian, youth director and child care coordinator.

Our mission and ministry also expanded to meet the needs of our members and the surrounding community. Long-time ministries were bursting at the building seams!!  Ultimately, it was not about growth for growth’s sake, but people – lives being touched and transformed by the grace of God in Jesus Christ!

The present fifteen acres were gifted to the church through the United Methodist Committee on Congregational Development.

The 9300+ sq. ft. new building has  five classrooms and capability to seat over 250 people, and is graced with a restored pipe organ.  Our first worship service in the new facility was Easter Sunday 2013.

Our Most Recent Posts